You visit Yellowstone National Park and take pictures of Yellowstone Bears. As you riffle through your album, you realize that you don’t know whether the bears in your pictures are brown bears or grizzlies. What is the difference?

In this post, we explore the much-debated topic: brown bears vs. grizzly bears. 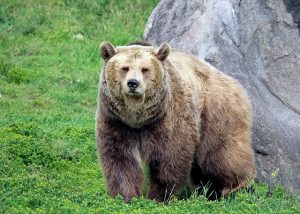 The name brown bear is commonly used worldwide to refer to the species Ursus arctos, one of the eight bear species that exist today. The Ursus arctos lives in North America and parts of Northern Eurasia and is known for its characteristic long claws, humped shoulders, and dish-shaped face. Fur-wise, this bear can have fur ranging from blond to dark brown or black.

Because the Ursus arctos is an opportunistic scavenger and omnivore, its size and diet tend to vary greatly depending on its environment. The largest member of this species can actually give a polar bear a run for its money.

Over the years, and due to the species’ adaptability, Ursus arctos has grown to include several subspecies of the brown bear. The most known of these bears in North America is the Grizzly bear.

Grizzly bears are a subspecies of the brown bear. They are inland bears that once dwelled in the wide western North American prairies and mountains. Currently, they live only in Alaska, isolated parts of the northwestern United States, and some areas in western Canada. This shift in habitat can be blamed on a century’s worth of habitat loss and human interference.

Grizzlies are scavengers, but unlike their coastal brother, their diet consists of roots, berries, moths, and grubs. As omnivores, they also occasionally supplement their diet with animals or animal remains.

Inland grizzly bears tend to be smaller than coastal brown bears, which feed on fish. That said, the size of a grizzly will still depend on its diet.

We have already established that grizzly bears are a subspecies of the brown bear. Simply put, all grizzlies are brown bears, but not all brown bears are grizzlies. Some of the distinct differences between the two include:

The grizzly bear lives inland and does not have access to fish and salmon like the brown bear. If a brown bear species has access to marine-based food, it is considered a brown bear.

Because of their fish and salmon diet, adult brown bears can weigh up to 1000 pounds in the fall. The adult grizzlies in Yellowstone National Park average less, with no known records of a bear weighing over 900 pounds.

An adult grizzly will typically have a trademark silver-tipped or grizzled appearance. Coastal brown bears, on the other hand, are usually darker-hued.

The question of grown bears vs. grizzly bears is a common one in the bear world. At Yellowstone Bear World, we offer you a lifetime experience with the latter. You can get to see the grizzly bear in its natural habitat of North America.

If you are visiting the Yellowstone National Park, your vacation is incomplete until you experience the wonders of the Yellowstone Bear World. Contact us today at 208-359-9688 to schedule a date with our park’s grizzly bears and other wildlife.