The animals included in the following list are just a few of the wildlife that visitors will see at YBW. New animals are introduced seasonally. Information: “National Audubon Society: Field Guide to North American Mammals” (1997). 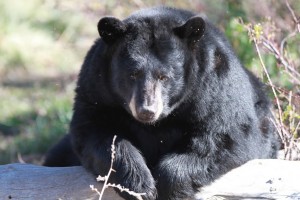 Mates in June – early July. Due to delayed implantation young are born during hibernation in January – early February. Cubs weigh approximately 7 oz. (the size of a “twinkie”). Litter of 1 – 5 (depending on food and fat surplus). 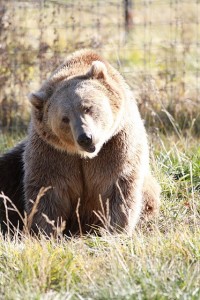 Omnivorous, feeds on a wide variety of plant material, including roots, sprouts, leaves, berries, and fungi, as well as fish, insects, large and small mammals, and carrion.

Moves with a low, clumsy walk, swinging its head back and forth, but when necessary it can lope as fast as a horse. Normally solitary, they establish dominance through size and threats, spacing themselves out, with the largest, most aggressive individuals taking the choicest stations. Grizzly cubs can climb, though not as nimbly as black bear cubs, but they loose their climbing ability during their first year. In winter, grizzlies put on a layer of fat, as much as 400 pounds. 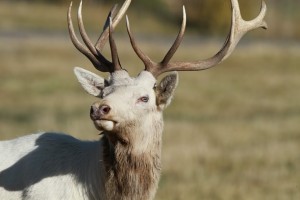 Mates late August – October. Usually one calf born in late May or June.

Grasses in summer, woody plants in the winter months.

From Eastern British Columbia down the Rocky Mountains to Central New Mexico and Arizona.

This animal marks the areas it frequents by stripping the bark from seedlings, the cow using her lower incisors and the bull the base of his antlers; they then rub the seedlings with the sides of the chin and muzzle. These posts may serve as territorial markers, warning other elk to keep out. The elk vocalizes in several ways. A young elk squeals, and adult snorts and grunts, and a cow neighs to her calves. The alarm call is sharp, barking snort. The “bugle,” or “whistle,” of a bull is a challenge to other bulls and a call of domination to cows; this vocalization begins as a bellow, changes almost immediately to a loud, shrill whistle or scream and ends with a series of grunts. Only the whistle carries over long distances. 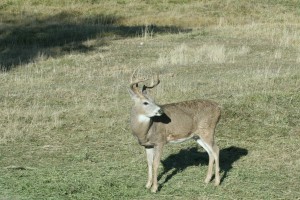 The Mule Deer has glands on the hindlegs above the hooves. A fawn seems able to recognize its mother by the odor from these glands, and when deer are in groups, they frequently sniff these glands

Grasses, acorns, nuts and some fruit and shrubs.

Southern Canada; most of U.S., except far Southwest.

A graceful runner, with top speeds of up to 36 mph, although it flees to nearby cover rather than run great distances. If alarmed, the deer raises, or “flags,” its tail, exhibiting a large, bright flash of white; this communicates danger to other deer and helps a fawn follow its mother in flight. A Whitetails’s age is determined not by the number of tines on its antlers, but by the wear on its teeth. 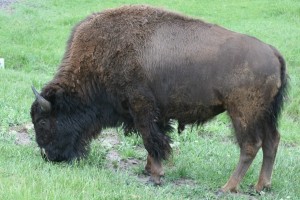 A good swimmer, it is so buoyant that head, hump and tail remain above water.

American Bison will stampede if frightened, galloping at speeds up to 32 mph. When butting, males walk to within 20 ft. of each other, lower their heads , raise their tails, and charge. Their massive foreheads, including much hair but not the horns , collide without apparent injury; they charge repeatedly until one animal gives up. 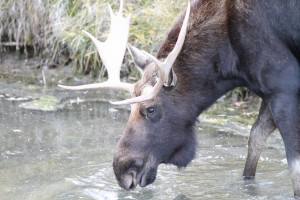 Summer diet is willows, and aquatic vegetation, including the leaves of water lilies. In winter, it browses on woody plants, including the twigs, buds, and bark of willow, balsam, aspen, dogwood, birch, cherry, maple, and viburnum. Moose loses weight in the winter and gains in the summer.

Most of Canada; in the East south to Maine, Minnesota, and Isle Royale in Lake Superior; in the West, Alaska, n British Columbia, and southeast through Rocky Mountains to the ne Utah and nw Colorado.

Good swimmers, the moose can move in the water at a speed of 6 mph for a period of up to two hours. At times, the animal may be completely submerged for many seconds. Despite it ungainly appearance, this animal can run through he forest quietly at speeds up to 35 mph. 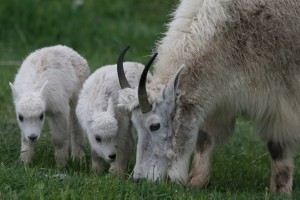 The Mountain Goat is not a true goat, but belongs to a group known as goat-antelopes, which includes the Chamois of Europe and Asia Minor. Its hooves are well adapted for rock peaks with a sharp outer rim that grips a rubbery sole that provides traction on steep or smooth surfaces. Avalanches and rock slides are the greatest killers of Mountain Goats, accounting for many more deaths than predation.