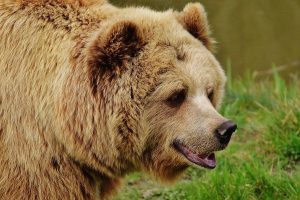 The smoldering Yellowstone super volcano is an underground heat engine that fuels the steaming geysers, bubbling mud puddles and hot springs. The 45-by 30-mile caldera is around the size of Rhode Island. While it is an active volcano, many scientists agree that it won’t erupt any time soon.

So, as you make your vacation plans, don’t hesitate to include the Yellowstone Super Volcano and Yellowstone Bear World to the list. It’s a beautiful and exciting adventure you wouldn’t want to miss.

The Three Super Eruptions at Yellowstone

Over the past 2.1 million years, the Greater Yellowstone Ecosystem has experienced three super volcanoes, which are monstrous volcanic eruptions. The first, named the Huckleberry Ridge ejection, happened approximately 2.1 million years ago. It was focused on what is currently the western part of Yellowstone National Park and stretched out to the zone around Island Park, Idaho. The volume of volcanic stone created by this event was around 2,400 times more than what the 1980 Mt. St. Helen’s eruption delivered.

Roughly 1.3 million years back, another incredible eruption happened in the western part of the previous eruption, close to Island Park. It left behind a caldera known as the Island Park Caldera, which is the smallest of three massive super volcanoes.

The third and latest gigantic eruption happened around 640,000 years ago in generally the same region as the primary eruption. It was somewhat smaller compared to the first, yet bigger than the second volcanic eruption. The caldera made by the latest eruption is alluded to as the Lava Creek Caldera and to a great extent covers the Huckleberry Ridge Caldera.

No other huge, super volcano eruptions have happened in the Greater Yellowstone Ecosystem over the most recent 640,000 years. However, a tremendous magma chamber with molten rock stays active beneath Yellowstone’s surface.

Other than the Yellowstone super volcano field, the world has nineteen other super volcanoes. If any of the super volcanoes erupt, it will release gases, debris, and magma high up into the air, drastically changing Earth’s atmosphere. Scientists are researching the Yellowstone supervolcano magma chamber and other comparative zones over the globe. They are doing so to better comprehend what causes them to erupt, and how to anticipate those eruptions well ahead of time.

Researchers accept that we would have warning signs long before any supervolcano eruption. They believe the ground would swell maybe several meters because of expanding pressure from underneath. The recent seismic action that Yellowstone has encountered isn’t a confirmation that a Yellowstone super volcano eruption will happen soon.

On your way around Yellowstone National Park, you should definitely consider a visit to Yellowstone Bear World, only a short drive southwest. Our exquisite facility offers you the chance of a lifetime to view numerous types of bears at different times of the year. It’s a memorable experience for both adults and children. Come and partake the beauty and nature of bears in the amazing Yellowstone with us.