The English-speaking world may forever wonder why a group of moose are not called “meese.” It could be because you won’t often find these massive animals roaming in groups of any kind. According to Animal Diversity Web of the University of Michigan, moose are one of the least social animals.

But that all changes around autumn when mating—or rutting—season begins. During this time of year, a dominant male moose, or a bull, will gather a harem of females for mating. Other bulls may enter the herd to challenge the dominant male, which is where their huge, flat antlers come in handy. Bull antlers can grow up to six feet wide, and they are shed after each mating season so humans can use them as home décor.

Among all of the deer family wildlife in Yellowstone, moose are by far the largest. Females weigh in at up to 882 pounds while males break the scale at up to 1300 pounds. They are also the tallest mammals in North America, standing anywhere from 5 to 6.5 feet hoof to shoulder. It’s no wonder they aren’t afraid to wander by themselves. 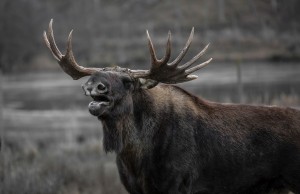 For all their size and strength, moose are relatively passive animals, spending their days munching on plants and tree bark. But make a note: passive does not mean harmless. There’s a reason you won’t find “Feed the Moose” on our list of activities in Yellowstone Bear World; they are among the most dangerous wildlife when provoked. During autumn when tensions are high, or winter when food is scarce, or spring when mothers are protecting their calves, a serene moose you spot through the bushes can quickly turn into a powerful freight train headed straight for you and your camera. Staying out of a moose’s personal space means staying out of trouble.

If you want to see these majestic mammals and other Yellowstone wildlife from a safe distance, visit Bear World this season. You’ll see moose, bears, wolves, deer, and so many other beautiful animals. Plus, maybe you can convince a few of our staff members to start using “meese.”

Last Day of the Season
October 16